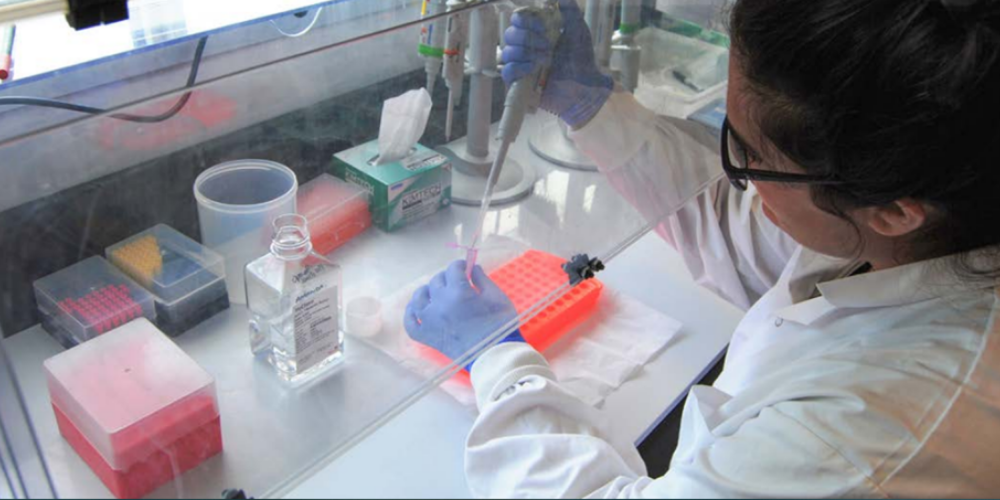 “We’re using multiple bio-tracers that have a geographical signal or fingerprint to find out where a species is from,” says Dr. Kevin McCann, a professor in the Department of Integrative Biology. “When a fish lives in a certain area, for example, through the water and through consumption it starts to wear that area’s spatial fingerprint.”

He explains that looking for many bio-tracers like DNA, stable isotopes, fatty acids and even the colour of the reflection of a fish provides robust data for finding the provenance of the species. There are thousands of potential bio-tracers in every species. McCann worked with Dr. Robert Hanner, professor in the Department of Integrative Biology and Arrell Food Fellow, together with research associate Kevin Cazelles and several others on the project, which was funded by Food from Thought.

It’s the kind of transformative research that directly supports part of Food from Thought’s mission, which is to increase the capacity, sustainability and safety of food production systems without undermining environmental health, ecosystem services or livestock health and welfare.

Global food supply chains are notoriously complex, with many steps along the chain from where the raw product starts to when it arrives at the grocery store or restaurant. If managed improperly, the potential for mislabelling where the food came from or even what it is – either inadvertently or intentionally – is very high.

Food fraud is economically motivated and takes a variety of forms, including ingredient substitution and other kinds of misrepresentation. It has a variety of consequences for consumers, producers and the environment. For example, seafood fraud not only compromises an industry that globally generates $143 billion annually, but it also creates food safety risks, compromises the ocean’s ecosystem, depletes important fish stocks and cheats honest people in the fishing industry.

In an earlier study conducted with the Canadian Food Inspection Agency, Hanner found that nearly 20 percent of the samples being imported into Canada were mislabelled. At the wholesale and processor level, it was closer to 30 percent, and at retail closer to 40 percent. Some countries have stricter regulations for sustainable fishing than others, so providing accurate information on the provenance of seafood and other food items increases the industry’s transparency and allows consumers to choose how they want to spend their money.

The team published a paper called “Spatial fingerprinting: horizontal fusion of multi-dimensional biotracers as solution to global food provenance problems” that details how the researchers approached the project and its results. The paper explains how multiple bio-tracers are used to create a spatial fingerprint and how using more biotracers makes results more accurate. Data fusion of bio-tracers is a powerful technique for determining a species’ provenance.

Data fusion takes hundreds or thousands of pieces of information and puts them together for authentication, for example, in facial recognition technology. In this study, 90 sockeye salmon samples were identified from three different zones: the U.S. (Alaska), Canada and Russia. By examining 17 bio-tracers – fatty acids and stable isotopes being the strongest indicators – the researchers demonstrated that increasing the number of bio-tracers increases the accuracy of regional traceability.

“We found that the higher the number of bio-tracers, the better the resolution and the more accurate the results,” says research associate Kevin Cazelles. “I was surprised that with a relatively small number of biotracers, we could be so accurate.” The team used three supervised learning methods to reflect current and emerging trends in food authentication. Supervised learning is a subset of machine learning and artificial intelligence that offers a powerful tool in classifying and processing data. The new approach could be applied to a number of other species and has tremendous potential for tracing where food originates globally.“You could even use this method to trace terrestrial food products like palm oil,” McCann says, cautioning that more work needs to be done.

The Future of Spatial Fingerprinting

While the proof of concept has shown that the method will likely work, it’s early days. McCann says that, with additional funding, the next step would be to build a library of data on fish and other species.

“This is a huge boon to the industry,” says Hanner, who has been researching food fraud for years. “For places like Canada, where the regulations are tight because of the lessons learned around overharvesting cod, consumers can be fairly confident in buying fish from here,” he says, adding that other countries don’t necessarily have the same rules. The Canadian cod fishery was closed in the early 1990s due to decades of overfishing that triggered a massive decline in the cod population. Tens of thousands of jobs were lost almost overnight.

In an interesting twist, a journalist with National Geographic contacted the researchers and asked them to test sockeye salmon that she had purchased at markets in New York City. “Some of the salmon that was labelled as product of the U.S.A. were actually Russian,” Hanner says. “Dr. McCann and his team’s work in bringing a whole constellation of markers to bear, along with the mathematical modelling and analysis, to provide this discriminatory power, is really pathbreaking.”