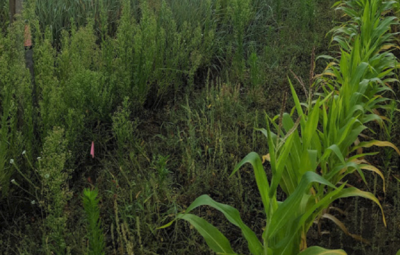 Riparian farm buffers, which are strips of vegetation planted along the banks of streams and rivers, have been found to capture most dissolved crop nutrients at shallow depths during the summer, according to a recently published paper on a Food from Thought-funded project.

The study was led by M.Sc. student Dan Noble and co-authored by Jana Levison, associate professor of Water Resources Engineering, Morwick G360 Groundwater Research Institute, and Andrew MacDougall, professor in the Department of Integrative Biology at the University of Guelph.

This research project focuses on downslope vegetation buffers with permanent-cover grassland to capture dissolved nutrients from corn fields on conventional farms associated with ALUS Canada. The study found that these grassland buffers could intercept and retain significant added nitrogen and phosphorus (up to 80% of added nitrogen and up to 99% of added phosphorus were retained within a 40 cm depth of soil) within the main rooting zone during peak plant growth.

These results suggest that incorporating these grassland buffers on conventional farms may be an effective way to improve nutrient management, reduce the amount of nutrient pollution in waterways, and contribute to food sustainability.