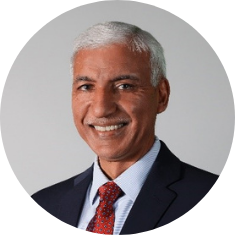 Dr. Jaspinder Komal is the Vice President of the Science Branch at the Canadian Food Inspection Agency (CFIA). From 2017-2021, he also served as the Chief Veterinary Officer (CVO) for Canada and as Canada’s delegate to the World Organization for Animal Health (OIE). In the OIE delegate role, Dr. Komal was elected as the Vice President and successively as the President of the OIE Regional Council of the Americas. In 2019, he was unanimously nominated by the OIE delegates from the Americas to be President of the steering committee for the Global Framework for Progressive Management of Transboundary Animal Diseases (GF-TADS), an initiative collectively led by the OIE and the Food and Agriculture Organization of the United Nations (FAO).

Dr. Komal graduated from the Faculté de médecine vétérinaire at the Université de Montréal in Saint-Hyacinthe, Quebec, with a degree in Veterinary Medicine and a post-graduate degree in Veterinary Microbiology. He began his veterinary career in small animal practice. Subsequently, he joined the Canadian Public Service in 1994 as a veterinary inspector. He assumed various positions of increasing responsibility by working at the CFIA and other Federal Departments, both in the Regions and at National Headquarters.

Dr. Komal has been a fellow of the Canadian Academy of Health Sciences (CAHS) since 2019.